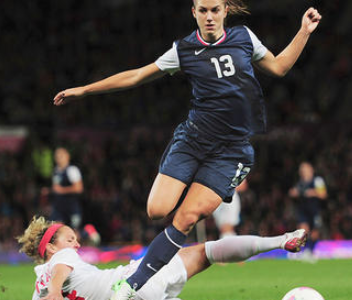 Alex Morgan
Born on July 2, 1989, Alex Morgan, a forward for the U.S. Women’s Soccer Team, went to Diamond Bar High School, and University of California, Berkeley. Her hometown is Diamond Bar, California, but her birthplace was San Dimas, California. In her high school days, she scored 45 goals, tying for third in all-time school history. Growing up, Alex Morgan was an athletic person. However, she only began playing soccer with an actual team when she was about 14 years old. At Diamond Bar, she was picked to play in her district’s all star team three times and also was named an NSCAA All-American. At Berkeley, where she went to college, she led the Golden Bears to the NCAA tournament and twice to the second round in all of the four years she was there. Later on, in 2008, she helped the U.S. win the championship by scoring the winning goal. This was named the goal of the game and the second best goal of the whole tournament. Also, in 2011, she scored multiple goals in both the semifinal and finals. In the 2011 Women’s Professional Soccer draft by Western New York Flash, Morgan was drafted first overall. And in the same year she played in the 2011 FIFA Women’s World Cup on the U.S. Women’s National Team. She scored her first-ever World Cup goal in a semifinal match against France as the youngest person on the team, to lose against Japan in the finals, in a shootout. Morgan dominated in the 2015 FIFA World Cup which led her to becoming the champion of the game. It all comes to show that she has been the star player in many of her games. At home, Morgan practices the way she would act on the field. Even though Morgan is the youngest of three sisters, Jenny (six years older) and Jeri (four years older), she always thought she wasn’t far behind them. “Everything was a competition,” she said. She would race them down the street and make it a competition. “Beating someone to us was just so sweet.” Morgan who is a super-competitive person stated that she doesn’t ever want to lose again after being a witness to her dad’s “champion dance” he did whenever he won. Did you know that Alex Morgan enjoys doing yoga and has a motorcycle license? Guess what?! She even has a cat named Brooklyn with six toes on each of its front feet! She also studied about abroad in Madrid in 2009 and not soon after, in 2010, graduated a semester early with a degree in political economy. Alex Morgan is a very fascinating person right from the start.