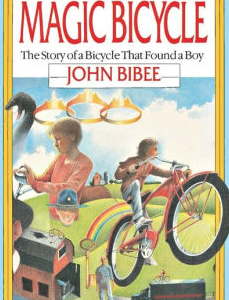 The Magic Bicycle by John Bibee is a book that I probably would never have picked up to read if it wasn’t assigned. The book had so many ups and downs, twists and turns, and it kept me on my toes every single time I was reading it. When I first picked up the book, I thought that I wasn’t going to like it but by the end of the first sentence, it had my attention.

My favorite character from the book is Horace Grinsby. The reason I liked him so much is because he always surprised you. At the beginning of the book, I thought that Mr. Grinsby was going to be the character who saves the day and becomes the hero. I soon found out that I was dead wrong. No one suspected him to be the person who would try to destroy the Spirit Flyer.

I loved the scene from the beginning of the book when John flew to Mrs. McCradle’s house to help put out the fire. He used the magic from his bike for good and he wasn’t selfish with the bike. He used it so that he could help out and save property and animals’ lives. John found out that there was a fire at the McCradles’ house and he knew the Sheriff Kramer (Uncle Bill) couldn’t get there in time because of how bad the storm was – the three bridges were swamped out with the flood. John knew he had to do something about it so instead of winning his chess game against Lieutenant George, he snuck out to help put out the fire at the McCradles’.

In every book, movie or show there is always a good guy, a bad guy, and most likely a person the main character hates or is bullied by. John is the good guy/main character, Horace Grinsby is the bad guy, and Barry Smeldowe is the bully. I feel like this book has the structure and guidelines that almost every book or show/movie has and that is what makes it interesting. It keeps your attention with its twists and turns.

In my opinion, at the end of every chapter John Bibee the author left you wanting to keep reading and never stop. For example, at the end of chapter 11, the last sentence was the note telling John to destroy the Spirit Flyer. It didn’t say who it was from so if you were a normal person, obviously, you would need to keep reading. As I mentioned before this book hooks you right from the start.

In conclusion, The Magic Bicycle by John Bibee is a book that I would never have read on my own but I am glad I did read it!

My dream life-sized gingerbread castle will be 170 feet tall and 150 feet wide. It’s called the chocolate castle. The walls will be made out of dark chocolate. Behind all of the walls there are strong and reliable peppermint blocks. The roof is curved and is made out of milk chocolate. (YUM!)

At the very top of the castle there is a two feet wide and two feet tall Jawbreaker. On Christmas eve the jawbreaker explodes and brings fireworks to the sky. Around the castle is a large moat but instead of water there is milk chocolate!  Giant Hershey kisses that act as mountains protect the castle from invaders. If you want to get in you have to say the password, the password is: “In the beginning there was a word, and the word was chocolate and it was good.”++++

Lots of animals love to hang out around the castle (they are also made out of chocolate). Right next to the castle there is a chocolate shop that hands out free chocolate. If you want to get some, go to 1449 Chocolate is Awesome Street. And while you’re eating your chocolate you can swim in my cotton candy pool or have fun in my gummy trampoline. There is also a machine that follows you everywhere you go and if you want chocolate it will race to the pantry and gets the chocolate that you want.

And if you don’t like chocolate that’s fine – just north of the castle there is an ice cream cave. It is guarded by an alive actual sized gummy bear.  Giant Hershey kisses that act as mountains protect the castle from invaders. So if you want chocolate and your parents won’t let you then just visit the Chocolate Castle.