Spoiler Alert – if you have not read “An African Story” do not read the below.

Roald Dahl was not only an author but also a pilot for the Royal Air Force. His short story, “An African Story”, is profound. Dahl writes this story as if it is a manuscript that he found, as if it was not written by him. Though the story has all the trademark Dahlian wit and pacing, it is presented as having been written by a different pilot, who died three weeks after he wrote it. Additionally, it is narrated in third-person omniscient, which lends the story further proof of Dahl’s own authorship. The story is about a man named Judson who was mentally unstable and had misophonia, which is the hatred of certain sounds. In the story, we are shown a series of events that eventually end with Judson’s death.

After Judson is killed by the black mamba, the Old Man says “You can have his share… We don’t mind you having his share” to the snake. The reader can infer that he was grateful to the snake for ending Judson’s life as, if he continued to live, Judson would only lose more of his sanity and pose an even larger threat to the Old Man. The Old Man felt that the cow’s milk was a small price to pay for Judson’s removal and showed his gratitude by allowing the mamba to drink the milk.

As the snake drank the cow’s milk, one can interpret that the Old Man sees its appetite as a replacement for Judson’s, for even if the snake could not be told what to do, it still is able to defend itself, and, as the cow doesn’t seem to mind, that was enough for the Old Man. However, it can also be said that the Old Man simply saw a necessity to remove Judson. Judson killed the Old Man’s dog without a legitimate reason other than it was making a repetitive sound, making comments on not only the cow’s sounds but the Old Man’s sucking of his tea as well which could foreshadow Judson attempting to kill him. The Old Man set up a trap, therefore, leading to Judson’s death.

Another reason could be the Old Man simply feared for his own life and decided the “slobbering madman” needed to go, as it was evidently shown he was not in the right state of mind and would eventually take even wilder actions.

The Old Man’s story teaches the moral of, “The enemy of my enemy is my friend,” by portraying Judson as an imminent threat towards his safety and that of his animals. Though the black mamba was dangerous, for “when one is bitten by a Black Mamba, and almost at once the poison began to work,” the Old Man treated the snake with gratitude and said; “Yes… We don’t mind your having his share” and allowed it to drink the cow’s milk.

Though I’ve only read about 100 pages in A Long Way from Home, I have noticed that Claude McKay thinks very deeply about what others say to him, but doesn’t always take their words into action. McKay is a like this when both Frank Harris and Max Eastman want his set of poems, and Harris specifically wants to publish a fiery poem called “If We Must Die”. He gave a set to Max Eastman who accepted them all, including “If We Must Die”. Frank Harris asks him why he would give that poem to The Liberator instead of Pearson’s magazine, as he had wanted it! McKay really wanted “If We Must Die” to be published in Pearson’s, too, but it was maybe too late.

“I figured that if Max Eastman overlooked [“If We Must Die”s’] absence I could conscientiously give it to Frank Harris.” He thinks about it but Eastman demands it back (sending him a telegram) for his paper. In another case, McKay was asked by George Bernard Shaw why he had become a poet instead of a boxer. Shaw, the great playwright and essayist, thought that boxing would suit him better. I’m glad that McKay decided not to listen to Shaw and become a boxer because people like me would not have gotten to read his poems.

The words you sang to me

When I, a little boy,

Knelt down against your knee.

And tears gushed from my heart, mother,

And passed beyond its wall,

But though the fountain reached my throat

The drops refused to fall.

And oh, I only wish that I

Could weep just once again.

This poem really stands out to me because as in a lot of his other poems, he seems very emotional and it makes me think of him as the guy who likes to cry. For example, in the poem The Tropics of New York, his last sentence is, “I turned aside and bowed my head and wept.” In this poem, he is able to cry. However, in December, 1919, I imagine how sad it is for a parent to die and would think it would be the opposite of what McKay did. Instead of not being able to cry, I would not stop crying. With McKay, perhaps, it was either be strong, or live the rest of his life crying. On the other hand, his relationship might have been so strong with his mother that he could not bring himself to accept that she was really gone. McKay knew she was gone, but he wouldn’t allow himself to cry over it because he perhaps had felt that if he did weep… well I don’t know. In the beginning, he talks about how he felt very comfortable with his mother, especially when she sang to him. His strong bond and relationship with his mother continues. Not face to face but heart to heart because he knows that she is still with him. Is this part of what makes McKay such a conscientious and relatable poet?

Claude McKay has changed a lot so far in A Long Way From Home. I have read around 100 pages of it and have noticed that Claude isn’t the same person that traveled from Jamaica. He is now more curious than ever to learn about the rest of the world, like the US, London, and Europe. He is finally starting to expand his writing beyond poems, with writing reviews of plays and publishing his second book of poems, Spring in New Hampshire. He is excited about the US, and on page 6 it says, “My mind was full of the rendezvous with that editor in New York. And as I couldn’t talk to any of the fellows about it, it was better to find elsewhere excitement that would keep me from thinking too much.” Claude is curious and seeks adventure whenever he can.

His interest about the world translates to his writing of poems and books, but despite his time in the US he never forgets his Jamaican roots:

“So much I have forgotten in ten years, /So much in ten brief years! I have forgot /What time the purple apples come to juice, /And what month brings the shy forget-me-not. /I have forgot the special, startling season /Of the pimento’s flowering and fruiting; /What time of year the ground doves brown the fields /And fill the noonday with their curious fluting- /I have forgotten much, but still remember /The poinsettia’s red, blood-red in warm December.”

This is Claude remembering Jamaica and shows why he is a poet. Claude is not just curious and brilliant, but he is also kind, and we see that despite the racism that is evident in the US he is able to be kind to those who don’t treat him well. Relating to Inaya’s post below, in the question of friendship testing the law, when McKay is alone at a restaurant a pickpocket comes by and tells McKay that the police are chasing him. McKay now has to make a decision on whether to help this man who is a criminal, or ignore. The logical part in McKay’s brain tells him to not run the risk of getting in trouble with the police for helping a criminal, but the other part in McKay’s brain is curious to see a relationship he could have with him. McKay’s curiosity gets the best of him and he gives the pickpocket his hat to hide him from the police. “Would you weigh the chances of getting caught…” This is from Inaya’s controlling idea, and it is a fair question. This is exactly the same scenario McKay is in. McKay weighs his options of choosing the law or a possible relationship, and he chooses a relationship. Like Inaya says in her controlling idea, “I think you would be surprised what you would be tempted to do.” 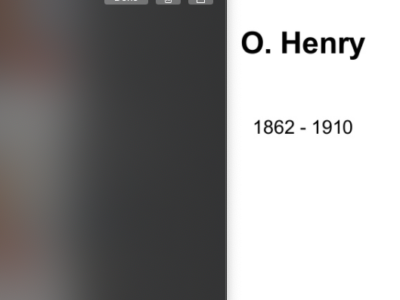 How Friendship can Interfere with The Law

In “After 20 Years” by O. Henry, friendship wants to be kept; whereas in “The Hitchhiker” by Roald Dahl, the law is challenged because of friendship, but in both, we have the same idea that friendship can always try to bend the law.

When the reader first reads “After 20 Years” we skim the idea that the policeman (Jimmy Wells) feels bad arresting Bob. Jimmy Wells still wants to maintain his friendship with him, but at the same time, the law has to come first. We really see this when you look in-depth into the story.  For example, “… I saw it was the face of the man wanted in Chicago [and] somehow I couldn’t do it myself…”. Jimmy did not want to arrest his friend, but since he was a policeman, the law forced him to. He really tested to see if he could bend the law for his friendship. He left the scene of arrest and got another officer, a plainclothes man, to arrest Silky Bob, who could have escaped.

Alternatively, in “The Hitchhiker,” the law is challenged because of the hitchhiker and the driver’s friendship.  The police gave them a ticket because they were speeding, which is against the law. If you see it from the policeman’s perspective they were breaking the law, but from the hitchhiker’s perspective, he understood that he was breaking the law, but the driver was just showing him how fast the car could go.  As he had egged him on, it should not be the driver’s fault.  Because of their friendship, the law is tested. We see this when the hitchhiker takes the ticket book away from the policeman. We see that in this story, friendship will come first before the law.

Even though both of these stories are different they both have the same idea that friendship can make you consider bending the law.  In “After 20 Years” the policeman does not arrest him on the spot – otherwise (he must think) they will lose their friendship. I bet after Jimmy hears “…[we were] just like two brothers, together,” he must have been touched.  In “The Hitchhiker” they were breaking the law, but the hitchhiker felt that it was a nice enough trade as he been given a ride.

After reading these two stories, we realize that the law has to come first and yet, that the law is always tested, and often broken, when friendship is at stake. For instance, consider someone very close to you – think of the person you would go any length to help, if they got in trouble. Now, imagine that you have an opportunity to warn them about a pending arrest. Would you weigh the chances of getting caught (and perhaps punished at school, and having your parents find out) with the freedom your action could preserve? If you take the question seriously and think about it, allowing for certain options or possibilities to appear in your imagination, I think you would be surprised what you would be tempted to do.