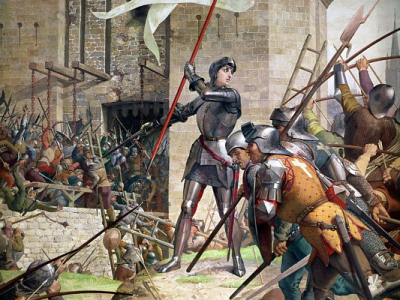 Seventy-eight years later, during the summer of 1428, Thomas de Montacute, the Earl of Salisbury, captured the towns of Jargeau, Beaugency, and Meung, to prevent supplies and men from reaching Orleans by the Loire River. Montacute laughed, drank, and celebrated with his fellow Englishmen. The French? Ha! They were nothing! Look at all of our victories! England was sure to win the war. Of course, it was regrettable that people had to die, but in a war, death was inevitable. Montacute was sure that the dead soldiers on the battlefield were proud of the sacrifice they had made for their country. He grinned as he sipped his wine. Watch out Orleans, he thought with a gleam in his eye, you’re next!

MAN In the morning I awake, With sweat, sorrow and with dread For I know there is no break In the days that come ahead. Oh, woe! The days are so grim, So sad, hopeless, and so bleak, Filled with bitterness and sin Of man’s penance on the weak. They care not for their shrill Read more…

Crane’s The Third Violet is essentially a love story between an artist and a girl with a higher social status than he. Situated in a peaceful rural area where vacationers can enjoy hikes in the woods and picnics near streams and rivers, The Third Violet has been criticized as a work that is confusing, and too short, and “were it not for the dog and one or two touches of nature, we would not like it at all” (unsigned). This speaks volumes about the critic’s opinion on this particular story. He or she plainly disliked it.

Untitled       The flowers cried sadly While their friends the trees died, Screaming in agony, Wounded by human pride.   For though no man could hear The grief of those so near Their hearts were filled with guilt For killing those nature built.

Center for Talented Youth: Lancaster, PA     As I walked down the hallway to my room, I noticed something – there were pictures of squirrels on all of the doors. (I would later learn that squirrels meant first years at CTY.) I was rather pleased with my picture: a terribly obese squirrel Read more…